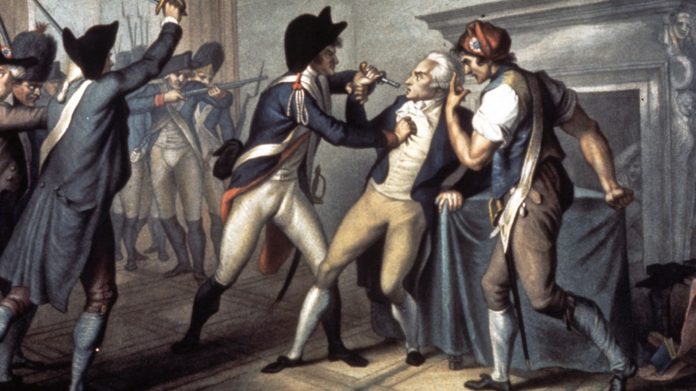 So momentous an event was the French Revolution, so labyrinthine its evolution and so far-reaching its consequences for the whole of Europe that it seems the purest folly to imagine that anything useful can be said about the subject in a book devoted to a single day. Yet, however improbably, that is exactly what this book sets out to do.

Still more eccentric is the book’s organisation. Traditional chapters are abandoned entirely. Instead we get five lengthy ‘parts’, each subdivided into a series of ever-faster-paced scenes, the shortest only a few paragraphs long. Each is headed merely by a simple indication of time and place: ‘10:45 am: Robespierre’s lodgings, 366 Rue Saint-Honoré’; ‘11:00 am: Tuileries palace and gardens’; ‘11:30 am: Vestibule to the Convention hall and environs’, and so on. One can almost hear the ticking of all those Parisian ormolu clocks.

Two things prevent all this from collapsing under the weight of its own wayward ambition. Colin Jones, one of the finest living scholars of early modern France, is no ordinary historian. And the day in question, 27 July 1794, was no ordinary day.

For 27 July 1794, ‘9 Thermidor Year II’ in the new republican calendar, has long been recognised as a ‘pivotal moment’ in the French Revolution. Until that point, the course of the revolution had been marked by increasing radicalism: France had gone from constitutional monarchy after the fall of the Bastille in 1789, to kingless republic in 1792, to wartime police state from 1793. After the events of 9 Thermidor, the trend was towards increasing conservatism. The democratic and reformist energies of the early revolution were mostly dissipated. Within a decade, France was again a monarchy, with a Corsican-born emperor in place of a Bourbon king.

This sudden bouleversement has conventionally been explained as a reaction to the guillotine-fixated excesses of the Revolutionary Government of Year II (1793–4) and the austere, donnish 35-year-old bachelor lawyer from Arras, Maximilien Robespierre, who was its malign presiding genius. With real power transferred after September 1793 from France’s revolutionary parliament, the National Convention, to a twelve-man Committee of Public Safety dominated by Robespierre, the regime had resorted to ‘terror’ as its principal means of deterring royal insurrection and purging ‘counter-revolutionary’ elements within its own ranks. After the new Law of 22 Prairial (10 June 1794), the rate of executions soared, with more ‘enemies of the state’ sent to the guillotine in Paris in June and July 1794 than in the whole period since the fall of the Bastille. When, on 26 July 1794, Robespierre addressed the Convention, urging the need for yet further purges, extending even to the Convention’s own members, his enemies in the government were provoked to act. They needed to neutralise Robespierre before he did the same to them. (…)