After nearly three-quarters of a century Robert Capa’s “Falling Soldier” picture from the Spanish Civil War remains one of the most famous images of combat ever. It is also one of the most debated, with a long string of critics claiming that the photo, of a soldier seemingly at the moment of death, was faked. Now, a new book by a Spanish researcher asserts that the picture could not have been made where, when or how Capa’s admirers and heirs have claimed.

In “Shadows of Photography,” José Manuel Susperregui, a communications professor at the Universidad del País Vasco, concludes that Capa’s picture was taken not at Cerro Muriano, just north of Córdoba, but near another town, about 35 miles away. Since that location was far from the battle lines when Capa was there, Mr. Susperregui said, it means that “the ‘Falling Soldier’ photo is staged, as are all the others in the series taken on that front.”

Experts at the International Center of Photography in Manhattan, where Capa’s archive is stored, said they found some aspects of Mr. Susperregui’s investigation intriguing or even convincing. But they continue to believe that the image seen in “Falling Soldier” is genuine, and caution against jumping to conclusions. “Part of what is difficult about this is that people are saying, ‘Well if it’s not here, but there, then, good God, it’s fabricated,’ ” Willis E. Hartshorn, the center’s director, said in an interview. “That’s a leap that I think needs a lot more research and a lot more study.”

Mr. Susperregui said he began his inquiry by examining the background of other photographs from the same sequence as that of the “Falling Soldier,” pictures in which a mountain range can be seen in the distance. He then e-mailed the clearest of those images to librarians and historians in towns around Córdoba, asking if they recognized the landscape, and eventually got a positive response from a community called Espejo.

“I didn’t tell anyone that this was connected with the ‘Falling Soldier’ because that subject is just so ideologically and emotionally charged,” he explained in a telephone interview from his home east of Bilbao. “But a teacher showed his class the photo I sent, and right away one of the students knew the place.”

Picking up where Mr. Susperregui left off, the Spanish press, led by El Periódico de Catalunya, a newspaper in Barcelona, recently sent reporters to Espejo. They returned with photographs in which the current skyline seems an almost perfect match with what is seen in the background of Capa’s photographs, taken in September 1936, less than two months after the Spanish Civil War began.

Cynthia Young, curator of the Robert Capa Archive at the I.C.P., said the new evidence suggesting that “Falling Soldier” was photographed in Espejo was “compelling, even persuasive.” The confusion over the site may have arisen, she added, because Capa “captioned so few of his pictures” during the trip, his first as a war photographer, and “very possibly didn’t remember” where he took the picture, probably leaving his agents and editors back in Paris to make a guess when they developed his film. No negative of “Falling Soldier” is known to exist.

Spanish historians say that though there was intense combat in Espejo in late September, no fighting occurred there early in the month, when Capa, then 22 years old, and Gerda Taro, his colleague and companion, would have passed through. Until “the end of September, there wasn’t a single shot fired here, just some aerial bombardments,” Francisco Castro, a villager who was 9 years old at the time, told El Periódico. “The militiamen promenaded through the streets and ate the best hams in town.”

An alternative explanation of the creation of “Falling Soldier,” one which the photography center finds plausible, is that Capa’s photograph, was taken “not during the heat of battle,” as Mr. Hartshorn put it, but during maneuvers, perhaps being done for Capa’s benefit, “and that there was a moment in which the exercise became real, and this is the result of that moment.” He added: “The supposition has always been that there was a sniper” who picked off the militiaman from a distance.

But Mr. Susperregui challenges that notion too, saying it “has to be entirely dismissed.” Not only were the front lines of the opposing sides too widely separated and “the aim of gunnery too inexact” to make that hypothesis feasible, he said, but “there is no documentary reference, neither written nor visual, about the use of snipers” on the Córdoba front.

The renewed debate about “Falling Soldier” coincides with the opening of an exhibition, previously shown in New York and London, of nearly 300 of Capa and Taro’s photographs and notes at the Catalan National Museum of Art in Barcelona. The wounds of the Civil War have not yet completely healed in Spain, and the country’s Socialist government has felt compelled to defend the photograph, still a symbolic image for the left, which lost the war to Gen. Francisco Franco, against accusations that it was staged.

“Art is always manipulation, from the moment you point a camera in one direction and not another,” Spain’s culture minister, the film director and screenwriter Ángeles González-Sinde, said after visiting the exposition last month. Even if the new controversy proves that the photograph is something other than what Capa and his admirers have always claimed it to be, she suggested, that does not detract from Capa’s genius.

The first sustained challenge to the authenticity of “Falling Soldier” came in the mid-1970s, in Philip Knightley’s book “The First Casualty.” But the tentative identification 20 years later of the dying militiaman as an anarchist named Federico Borrell, known to have died at Cerro Muriano on Sept. 5, 1936, seemed to quell that controversy.

Mr. Susperregui, however, visited the Cerro Muriano site and notes that it is “a wooded area, with century-old trees,” not at all like the open hillside shown in Capa’s photograph. His book also refers to an article published in 1937 in an obscure anarchist magazine as a tribute to Federico Borrell, in which a fellow combatant describes Borrell as firing “from behind a tree” when he was killed and adds that “I can still see him stretched out behind the tree that served as his barricade, with his unruly hair falling over his face and a trickle of blood dripping from his mouth.”

In 1996 Magnum Photos, the agency that Mr. Capa helped found and which was run for many years by his brother Cornell, issued a statement contending that the naming of Mr. Borrell proved beyond any doubt that the “Falling Soldier” photograph was genuine. Magnum did not respond to requests for an interview about Mr. Susperregui’s findings.

In the book Mr. Susperregui also dwells on what he regards as other contradictions in the received account. He notes, for example, that Capa spoke in various interviews of the militiaman being felled by a burst of machine-gun fire, not a sniper’s bullet, and that the photographer also offered widely varying accounts of the vantage point and technique he employed to obtain the “Falling Soldier” photograph and another, almost identical image shortly afterward.

The truth of the matter, the photography center’s Mr. Hartshorn said, is that “it’s like a detective story, the crux and core of which is that we don’t know.

“There is enormous speculation,” he added, “but there is very little to hang your hat on and say, ‘This is what we know.’ There are just too many moving parts and pieces that you can’t verify or prove.” 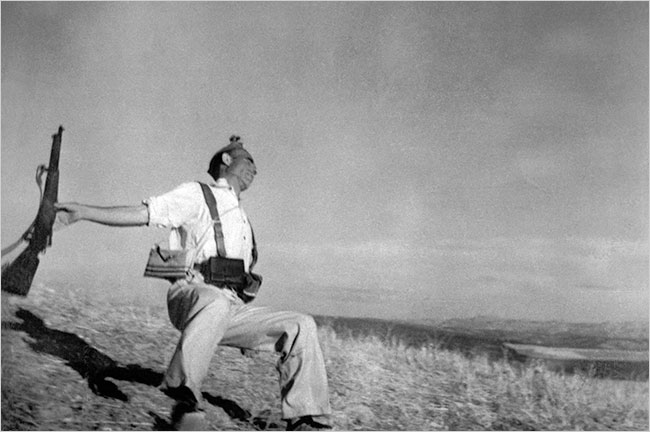 Robert Capa’s “Falling Soldier,” from the Spanish Civil War has drawn both acclaim and questions over its veracity. 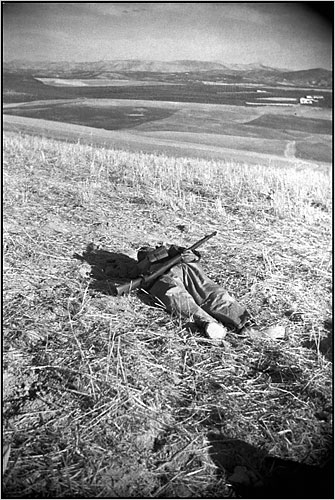 A photo of another man from the same sequence as “The Falling Soldier.” A researcher has used the mountains to identify what he says is the picture’s correct location. 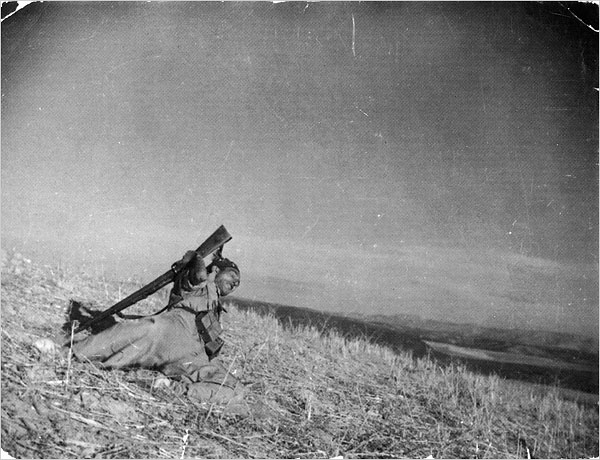